I discovered something new several nights ago that has opened up a whole new world to me and I’m SO excited about it.

Guys, did you know that charcoal pore strips on your nose can get out literally *YEARS of build-up (that is if you’ve never used one before and just wash your face normally)?

To the point where after last night’s success, I focused on another area of my face that I wish was a bit smoother and hair free……my upper lip mustache.

Now if you didn’t know, a pore strip is like an industrial strength Band-Aid that you apply to your nose and leave on for 10-15 minutes and peel away. In that time it sucks out blackheads, dirt and impurities to give you a smoother, cleaner appearance. If you have particularly oily skin and haven’t used one in a while, you may end up losing weight in the process.

So back to my thought process. The pore strip worked SO well on my nose I decided to give it a whirl on my upper lip mustache.

And if you are a longtime reader of mine you know why I’m blogging the experience…..

Now in the defense of the knock-off Biore brand of pore strip in question, the strip never claims to remove unwanted hair. I just assumed that if it managed to successfully grab out gunk from deep within your pore, taking out unwanted hair wouldn’t be that much of a stretch. I mean, since it’s already down by the root of the hair anyway it might as well grab it and yank it out on the way back up the pore.

Not doing so is kinda irresponsible if you really think about it.

So what exactly happened? Well, take a look:

Now I know you can’t see it in the picture above, but the pore strip DID NOT remove any of my mustache hair but instead DYED. IT. BLACK.

Now I like Charlie Chaplin as much as the next guy, but I don’t necessarily want to look like him. My general beauty routine is to make my mustache not as visible. I never try to highlight it. But maybe this could be a new trend. Women accentuating their mustache.

I suppose if men have started wearing man buns and rompers in pastel colors (you do you, boo) women can stop minimizing their mustache hair. Maybe the next big thing will be unicorn mustache hair where the person dyes their upper lip hair pastel colors and throws some glitter on it for good measure.

Now that’s a trend I could get behind. 😛

*Ok, so technically the box says the strip only takes out a few weeks of gunk, but I’ve never done it before so I’m SURE it took out WAY more than the package described. Seriously, you can’t convince me otherwise.

**Disclaimer–Don’t try this at home, kids. The back of the box says to not use on anything other than your nose and we all know how I tend to test “directions” and throw them out the window. That is how the “Lulabelle Cooks Without a Net” series got started. I just wanted to throw that out there in case someone tries this and it doesn’t go well and they end up trying to **sue me for planting bad life choice ideas into their heads.

**At least wait until my blog has generated SOME income. 😛

****PS: When using a pore strip on your nose, make sure you leave it on at least 10 minutes until it dries. Otherwise, this could happen. This PSA has not been sponsored. I just wanted to perform a public service. Your welcome. 😀 (Also do this when you are near a working clock 😉 ) 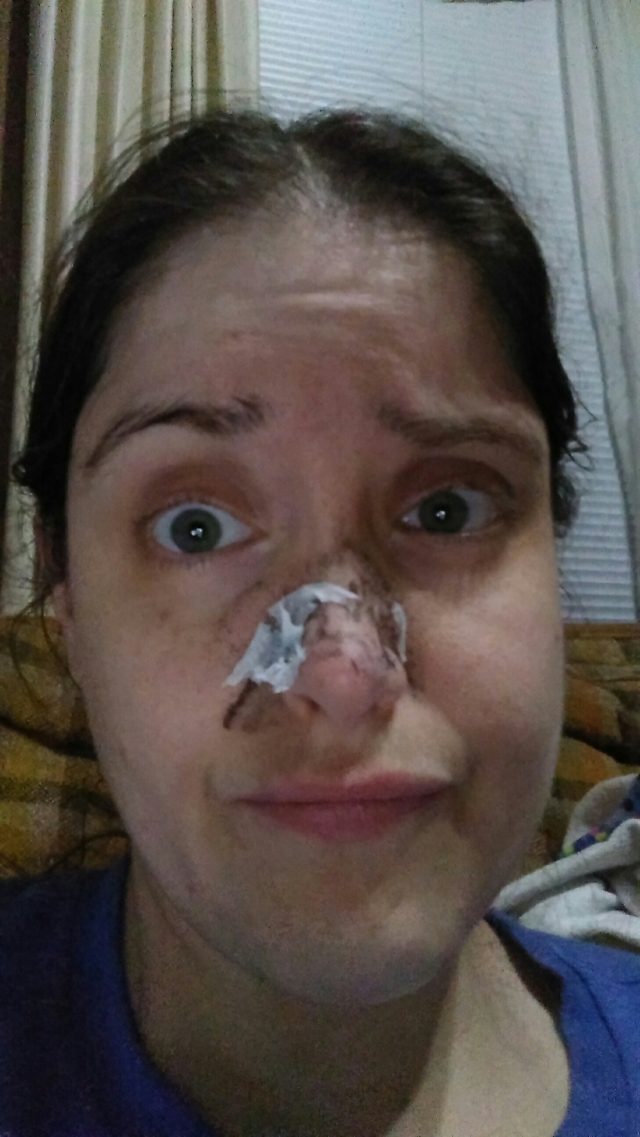