Before we get into it today I have a few confessions:

#1: I’ve already tried this flavor as I had a salty craving the other day and they were just sitting there on the counter…..whispering my name. It was creepy but I couldn’t resist. I did have to call in a priest to exorcise the bag so it’d quit whispering my name and the procedure was a success.

#2: I wasn’t looking forward to doing this one. I took one look at the package and maybe recoiled slightly. The only thing I could think of that I thought these would taste like are those Flamin’ Hot Cheetos that took elementary schools by storms about 8 years ago and have since been banned in several school corporations due to students getting chest pains and weirdly colored stool after eating them. Yep, definitely something I’d like to subject myself to…..but for the sake of my blog….. 😛

Upon opening the bag, I definitely smell a smoky BBQ smell. The taste is also smoky BBQ with quite a bit of heat. The heat lingers on the tongue for a good little bit. The closest thing I can compare it to is Open Pit BBQ sauce, in chip form. Fun fact, I grew up eating Open Pit BBQ sauce on home made macaroni and cheese. For some reason my palate can’t handle that combination anymore. Ah, growing up is sad sometimes. 😦

So, our oldest cat has been glued to my side the whole time I’ve been writing this and she’s been curious about what is in the bag. Now I’ve made sure she didn’t eat any of the chips and have moved the bag away from her several times. She just licked my finger–of the hand that held a chip– and then looked at me with this expression on her face like, “Mom, why did you let me do that??” She’s currently at the water station trying to quench the smoke coming out of her face.

That’s actually one of the benefits of this flavor. They are so hot that you can only eat a couple before you have to stop and drink a glass of milk. And my threshold for spicy is pretty high 😉 . That said, if you  are watching your portion control, these would be the chips for you. Also if you are trying to kick-start an overdue labor, keep these on hand if a long walk, drinking castor oil and doing “other activities” don’t work ;-). 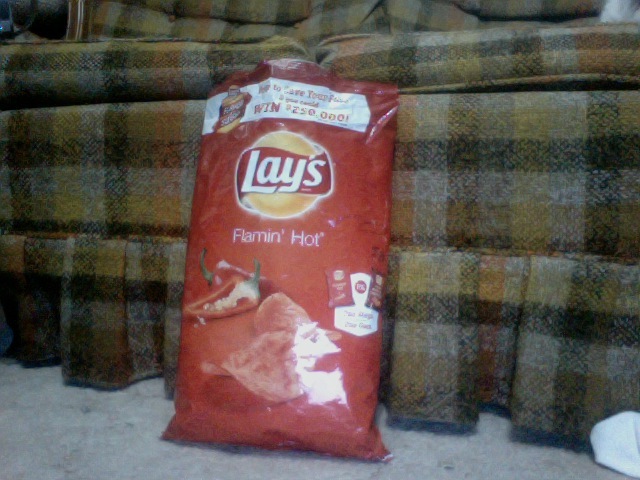 PS: FTC Disclosure: This is not a sponsored post. All products were purchased with my hard earned cash that I make chasing around and changing the diapers of little children who want to be doing literally anything else rather than getting their diaper changed.

PPS: No cats were harmed in the making of this blog and some events that were discussed in the preceding blog may have been stretched for artistic license. It amazes me that I even have to say this, but then again we do live in a world where ironing companies have to put a disclaimer on the iron box, telling you to not iron clothes while wearing them.

Over the weekend I conducted an experiment. For a long time my husband and I have had a debate, “Which Frosty from Wendy’s is the best, chocolate or vanilla?”

Now, truth be told, I’m a bit of a purist when it comes to my Frosty. When vanilla debuted, it seemed a bit of a sacrilege really. Then several years later, I met and fell in love with a man who preferred the vanilla. This suddenly made for a very confusing world.

Then one day curiosity got the better of me, and after going through a Wendy’s drive thru with my husband, I decided to throw caution to the wind and try out the new Frosty. Of course I didn’t order a whole one for myself, I ordered the chocolate and tasted a small sample of my husband’s  vanilla Frosty. It was at this moment that I realized something crazy….the vanilla frosty tasted to me JUST LIKE Dairy Queen’s vanilla soft serve!! I swear it was like Wendy’s went into the DQ headquarters after dark, broke in and stole the recipe for their soft serve!!

Ever since then, I’ve wanted to do a direct comparison of DQ soft serve and Wendy’s vanilla Frosty. This past weekend I got my chance. With an assist from the spouse, the experiment began:

(It should be noted that I intended to input a photo of both products here. As I attempted this, I realized I have yet to put them on my computer and the camera I used is not in the house. #bloggerfail. I’ll upload the photo later this evening!)

Both samples of ice cream were put in front of me. Both the same size. Both contained plastic spoons (although if we had to do it again, we’d get the exact same spoon for each sample as the DQ spoon we used has a unique curve that you can feel even when your eyes are closed. Despite this anomaly, the experiment continued…you know, for science and stuff 😀 ) Before testing each sample, my palate was cleansed thoroughly with water.

I was able to correctly guess which was which. While both have I’d say the same flavor, there is a definite consistency difference that separates the two ice creams. Which leads us to:

DQ soft serve has a smoother and thicker quality to it, while the Wendy’s Vanilla Frosty is a bit icier, with a somewhat grainy texture. However the flavors are remarkably similar, with the soft serve sample ending with a bit more of a sour after-taste.

With our experiment done, I can now say that the DQ soft serve is the over-all winner. If I want vanilla soft serve ice cream, I’m going to go to Dairy Queen every time. For a Frosty fix, you’ll still find me at Wendy’s ordering the original chocolate version.

Our next experiment will be to see if we can turn a vanilla Frosty the original by only adding chocolate syrup. Maybe also whipped cream. After all, this is all in the name of scientific advancement. Yeah. 😉