The following blog post is dedicated to my late Grandma B who asked me for years to write down this story. ♥

Every summer for as long as I can remember my family has gathered in Michigan once a year for a week-long reunion at a family camp. This year was extra special because my 6 year-old nephew was able to come along. For the first time I got to experience camp through the eyes of a child. There were fantastic climbing trees, a huge sandbox (beach) and of course, a giant pool (lake). At the end of the week, there is also a Kid Olympics, put on by the camp counselors. The events included are a sailboat race (the kids construct small boats out of any item and then they race in a small creek), a frog jumping contest (the kids catch frogs in the creek then race them on the basketball court. Fastest frog wins), and the watermelon race (all the kids get into the lake with a greased up watermelon and try to get it up on the beach-you’re right, this one doesn’t make much sense, but it is safer than it sounds-the watermelon is then eaten later at dinner).

Many moons ago, this blogger participated in the frog-jumping contest when she was about the same age as her nephew is now. Her older siblings and cousins went about collecting potential winning jumpers to cheer and cajole across the finish line. They put them in a large bucket, and let the younger cousins pick their frogs first.

When the bucket came across to me, I looked inside and saw frogs of varying sizes and shapes. One in particular caught my eye. About as large as a saucer, with stripes down his back, this particular frog caught my eye because he almost flung himself right into it.  Instead, I panicked and flung my head back, just in time for the amphibian behemoth to land squarely on my chest. I let out a scream and the frog jumped back into the bucket. I recovered, picked a more docile specimen then waited for the contest to begin.

Now, the way I remember it, the contestants and their human handlers sat in a line on the tennis courts. The handlers sat with their hands firmly grasped around their frogs. When the whistle blew, the frogs were released. The hope was the frogs would hop, in a straight line, over the finish line, and onto victory. But anyone that is familiar with frogs at all knows that they are pretty unpredictable. So, expecting them to jump in a straight line is a pretty lofty goal.

Another rule of the contest was that the handlers were not allowed to touch their frogs after they were released. If they needed “help” to jump, the handlers were told to simply smack their hands beside and behind the frog to startle them into jumping. One could also yell if need be.

And so the contest began. All around me, kids yelled, smacked the ground and their frogs jumped straight into the air. My frog, the one that I picked after the saucer sized behemoth scared the crap outta me, just sat on the hot asphalt and blinked his beady little, lazy eyes. When I did convince him to jump, the prize was being awarded to the winning frog. Adding insult to injury, the winning frog was as large as a saucer. With stripes down his back.  I’m pretty sure when I approached him after his win, I saw a smile on his little punk froggy face.

My sweet Grandma B tried to cheer me up after the race, saying that we’d go back to their cabin and make s’mores. I guess s’mores cured anything that ailed you back then.

Later that night, after the s’mores had been made and devoured, I lay awake in bed. Remembering the events of the day. Mentally kicking myself for letting fear overtake me and thus making me lose a contest. Seriously, the stakes of the contest couldn’t have been higher–the winner got free ice cream. Our entire family stayed over at my grandparents cabin for the night and the walls were pretty thin. Finally my anger from the day just boiled over and I yelled loudly, “I could have KILLED that thing!!” Apparently my pacifistic world-view didn’t extend to lazy frogs that refused to perform on cue.

Fast forward to this past week at camp with my nephew. The time for the frog jumping contest was nearing, and I didn’t want him to go through the same torment that I had. So I took him through a couple exercises that helped hone his handler skills. We practiced slapping the pavement. And having positive thoughts. But the biggest change from my story to his, is that he was not afraid of a large frog. Well, he was in the sense that he refused to touch it, but he wanted to race with a big one, so he went down to the creek with his grandparents, pointed to the largest one he could find, and watched as his grandpa retrieved the specimen.

The contest set up was a bit different from when I raced, in fact the kids didn’t actually have to get on the ground with the frogs. First of all, the contest was moved from the tennis court to the basketball court. All the frogs were set inside the middle circle. At the whistle, the frogs were released and the first frog to jump out of the circle won. And yes, it still counts if the child handler stands next to his grandpa who’s really the only one that can control the frog, watches grandpa set the frog on the ground, and then take a few steps back and watches the frog leap to victory. The child handler then celebrates his victory by eating the awarded banana flavored Laffy-Taffy, and the frog is quickly escorted back to where he had been retrieved.

Two similar stories with two completely different endings. One ended in victory, the other in defeat. The lesson in all this is to do your best, and be gracious when things don’t go your way. At least in public. 😉 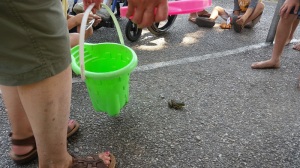 And here we all are, surrounding the winning frog as he basks in the glow of victory. If you look closely, you’ll see a teeny-tiny medal around his neck. 😀